For those who have kids in school age, the last couple of months have been quite a revelation.
Used to kiss them goodbye in the morning and see them again only many hours later, whatever happened all day long inside the classroom was largely a guessing game, with the sole prop of clues that were either sporadic (the interaction with the teachers) or outright poor (the recounts of the usually reticent pupils).

But when suddenly home-schooling became the new normal, it was as if the fourth wall collapsed, allowing us to take a glimpse at what happens routinely behind the scenes.
A somewhat displacing experience, the one thing it did was giving us a better understanding of both the benefits and the limitations of digital and traditional means to deliver education.

There is no doubt that a physical interaction with teachers and peers is crucial, not only for learning purposes, but also for a healthy social development; on the other hand, the increased adoption of communication technologies that are already part of the youngsters’ lives plays a role in engaging them more and better in the learning process.

As such, we suddenly found ourselves at a crossroads where we must solve the dilemma and obtain the best of both worlds: by blending real world and digitally constructed contents, immersive technologies can be the answer.
Let’s be clear about this: the pandemic did not raise the question from nowhere; it simply put it right at the top of the agenda. The case for mixed reality was already there well before the outbreak, and it rests on a set of reasons that we can schematically summarise as follows.

The Benefits of Augmented Reality in Education

This is arguably the most powerful driver, as the interactive nature of Augmented and Virtual Reality help raise attention’s levels on any subject.
Think about a maths lesson where pupils learn proportions by designing a building and then seeing it digitally erected: if their calculations are wrong, the result will be evidently disastrous! Not only that, but they will be extra-motivated to understand the theory better in order to improve the outcome.

Research on the topic is extensive and unequivocal: by pulling contents through their own discovery, users recollect more memories – and more vividly – than they do when they are at the receiving end of a “passive” teaching approach.

Augmented Reality is the perfect vehicle at this respect: one thing is to learn chemistry on a book; a totally different experience is to so by conducting experiments virtually, thus – by the way – without the need to equip an expensive lab.

The “virtual lab” example has introduced the idea, but there is more to add in respect to costs saving.

Sure, immersive technologies entail upfront investments that, especially in the case of public institutions, might initially be seen as a stumbling block.
A couple of things however must be taken into account: first of all, applications of this kind increasingly run on hardware that is already in the students’ hands (their own mobile devices); and in the mid-run, the flexibility and the ease in updating the contents reduces the costs for designing and renewing the lessons.
In short: while acquisition costs are decreasing, cost savings are getting more and more conspicuous.

Develop the digital skills required by the new professions

Think about it: never in history was ever the opportunity to learn (and have fun) while building a professional profile in the process. Yes, of course traditional teaching methods mould the youth’s minds in ways that pay dividends years down the line in the work place.

But one can hardly argue that mastering the “technologies” and the methodologies historically deployed in the learning process (reading; taking notes; translating from Latin) could be immediately and effectively applied in a work environment.
Enjoying and creating mixed reality experiences in learning about any given topic, on the other side, offers an incredible hands-on training on skills that are in high demand in the digital world.

An engaging and proactive approach to learning, put in place in a cost-effective fashion while equipping students for the professional world: upon these pillars we now have the opportunity to re-think education.

Younger generations are accustomed to acquiring knowledge through mobile devices and active experiences, and educational institutions not adapting accordingly will struggle to cope with their demands. It’s been clear for a while that updating teaching methodologies, resources and curricula to adopt a new approach to education was the only way ahead: the time has now come to switch the gear. 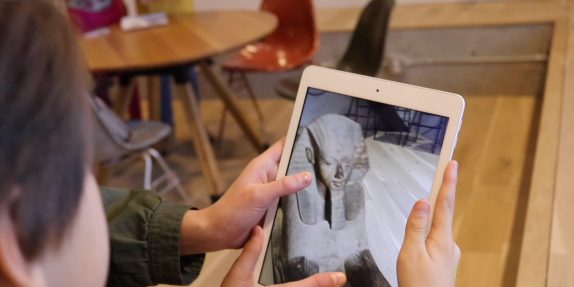 The Contribution of Mixed Reality to Cultural Heritage during the pandemic

Towards the Smart Warehouse: Logistics 4.0 with Augmented Reality